Work on new Hayes and Harlington station to begin in spring 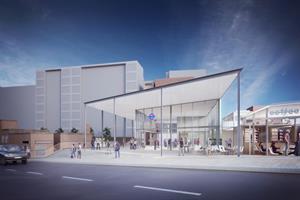 Plans for the new glass and steel structure, which is scheduled to take 18 months to build, have been approved by Hillingdon Council

Planning permission has been granted for a new Hayes and Harlington station to be built ahead of Crossrail's planned arrival in 2018.

Construction is scheduled to begin in late spring this year, lasting around 18 months.

The developers say the new glass and steel “landmark” structure will be more prominent than the existing building and will house a “bright, spacious” ticket hall.

The designs also include:

a new waiting room on platforms four and five

Councillor Douglas Mills, Hillingdon Council's cabinet member for community, commerce and regeneration, said: "I'm delighted that the application for the Crossrail station in Hayes has been approved by the council's planning committee as this will be a once-in-a-lifetime opportunity to create an impressive and welcoming gateway in the town.

“I am also pleased that Crossrail have agreed to incorporate some of the original materials from the historic station into the new design.

“We hope that Crossrail will take pride in delivering the station to the quality that Hayes deserves and look forward to working with Crossrail to maximise the benefits of the new stations for residents and businesses."

Bridge House, the block of shops and businesses immediately outside the front of the existing station, will be demolished to make way for the new building, which has been designed by Bennetts Associates.

The existing station will remain in place throughout.

From the end of 2017, the new station will be run by Transport for London (TfL).

Under TfL's plans, when Crossrail opens fully in 2019, the station will be served by up to 10 trains an hour, allowing passengers to travel directly to central London without having to change trains.

TfL claims journeys to Bond Street and Canary Wharf will be 15 and 17 minutes shorter, respectively.

“The new building will properly reflect the importance of the station to the area and, together with the broader improvements, will make using the station a much more pleasant experience.”

Developers say the new "landmark" station will be more prominent than the existing building, while retaining some of its original features
In addition to the new station, Crossrail has been working with Hillingdon Council on proposals for improvements to Station Approach.

The changes would supplement a £6m regeneration of the town centre, which recently got under way.

David Laing, studio director at Bennetts Associates, said: “It has been exciting to be involved in the design of the new station, introducing transparent, light and secure spaces for public use which should contribute to the further development taking place in the surrounding area.”

A public information session will be held to inform residents about the plans and the work scheduled for over the Easter period. It will take place at Play Hayes, next to Tesco Express, in Station Approach, Hayes, between 3pm and 7.30pm on March 24.