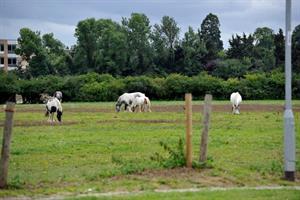 A total of 40% of new residential builds in the borough were on the green belt in 2014 and 2015, despite promises that "preserving green spaces is a council priority"

Two in every in five new houses in Hillingdon are built on green belt land, with the percentage of homes built in the borough last year reaching more than 10 times the national average.

Figures from the Department for Communities and Local Government have revealed the proportion of new residential builds situated on land previously designated as green belt.

In Hillingdon, as much as 40% of new residential builds were located on the green belt in 2014 and 2015 – the joint third highest proportion nationwide and 13 times higher than the national average.

Compared to other west London boroughs Hillingdon is an anomaly, as Hounslow is the only other place where any new houses were built on green belt, according the the data.

Branching out onto the green belt meant that new houses in Hillingdon were far less packed-in than new houses in other parts of London.

In Hillingdon, new houses were built in areas with 44 addresses per hectare on average compared to 47 in both Harrow and Hounslow and 113 in Kensington and Chelsea .

Residents have previously expressed concerns over fears greenbelt land in the borough could be sold off and redeveloped, whilst Hillingdon Council have prosecuted for an illegal carpark on greenbelt , stating that "preserving green spaces is a council priority".

Caroline Donnelly, founder of Friends of Hayes End, an "informal residents' association for people living and working in and around Hayes End", wants to protect a 145-acre plot of greenbelt land in Hayes End .

She said: "I have to say I find the Department for Communities and Local Government's findings about Hillingdon's track record in preserving its supposedly sacrosanct green belt areas hugely troubling, and I'm sure many people in the local area will feel the same.

"In light of the recent sale of Hayes Park, which is home to a sizeable tract of green belt land, these figures serve to highlight precisely why local residents are right to be worried about whether or not the council will choose to uphold the promises made in it's 2013 Green Belt Assessment Update, to preserve this much-loved piece of protected space, should the new owners seek permission to build on it.

"One of the original aims of green belt land is to act as a buffer to prevent urban sprawl within local communities, and - with the rapid and expansive developments going on in Hayes Town, not to mention the looming threat of a third runway - we need to protect the remaining green spaces we have in the local area more than ever."

Hillingdon is third in the UK for building on green belt

Nationally, just 3% of new houses were built on green belt land in 2014 and 2015 , while 8% were built in areas deemed to be of high flood risk by the Environment Agency.

Beating Hillingdon borough, South Staffordshire saw the highest proportion of new homes built on the green belt at 45%, while a whopping 97% of new homes in Boston, Lincolnshire were built on sites with a high flood risk.

New houses in Castle Point in Essex, New Forest in Hampshire and Richmondshire in North Yorkshire were the least packed-in nationally with just 13 address per hectare.

In contrast, new builds in Tower Hamlets were in areas with 132 addresses per hectare.