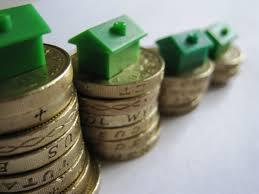 House prices hit a new record last month, after the rate of growth soared to the highest level since last August, according to Halifax.

House prices hit a new record high in October after rising at their fastest rate for 14 months.

It means average property values are now at the highest point since mortgage lender Halifax started its House Price Index in January 1983, having jumped by 1.1 per cent last month.

The annual rate at which prices are increasing accelerated to 9.7 per cent, the highest level recorded since August last year and up from 8.6 per cent in September.

But these have not being matched by more homes coming on to the market, creating a significant mismatch between buyers and sellers and forcing property prices higher.

Martin Ellis, Halifax housing economist, said: “The imbalance between supply and demand is likely to persist over the coming months, maintaining upward pressure on prices.”
Who does it affect?

Rising house prices are good news for existing homeowners, who can sit back and enjoy watching their property increase in value.
However, they won't help potential first-time buyers, many of whom are struggling to raise the large deposits needed to get on the property ladder.

They are also bad news for people hoping to trade up to their next home, as rising prices are increasing the gaps between the different rungs on the property ladder.

However, Russell Quirk, chief executive of eMoov.co.uk, warned that although this might make good reading for many homeowners who are due to benefit from an increase in the value of their property, Brits should learn from previous property lessons and "proceed with caution".

"Yes mortgage costs are low at present, but this won’t be the case forever. I think a large number of the British public scrambling to secure mortgages now, coupled with a severe lack of stock on the market, is a dangerous fuel to be driving the property market on," he said.

"UK buyers could be tempted to borrow more than they would in normal circumstances, in order to secure a property in a market where it is becoming increasingly difficult. Should interest rates jump up, they could find themselves in a difficult situation financially.”

House prices have been on a steady upward trend for the past two years, as buyers returned to the market, but sellers sat on their hands.

"A large number of the British public scrambling to secure mortgages now, coupled with a severe lack of stock on the market, is a dangerous fuel to be driving the property market on."

The number of properties for sale remains at a record low, after falling for the eighth consecutive month in September, according to the Royal Institution of Chartered Surveyors (RICS).

Until more homes are put on the market and there is an increase in the rate at which new properties are being built, buyers are likely to continue to outnumber sellers, forcing house prices higher.

In London, where house prices are out of sync with the rest of the country, there are just 243 properties for sale on Zoopla with a price tag of £200,000 or less.