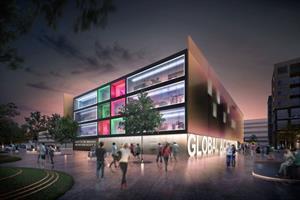 Construction has begun in Hayes on the site of the Old Vinyl Factory for a new media college which is due to open in September 2016.

Media and entertainment group Global announced that its university technical college will house 800 students looking to work in the broadcast and digital media industry.

Ashley Tabor, Global’s founder & executive president who came up with the idea of the academy, said: “There is a real shortage of young people coming out of school with the skills needed to work in the broadcast and digital media industries.

"The Global Academy will give our students the practical skills they need to hit the ground running as well as teaching them core subjects in a practical way."

Academic and vocational training will come together for 14-18 year olds who will sit GCSE's and A levels, as well as train to get the digital skills needed to work in the industry.

Courses which are accredited the college's partner University of Arts London (UAL) will includes radio and TV production broadcast engineering, app and web development, script writing and other journalistic choices.

Deputy Leader and Cabinet Member for Education and Children's Services, Councillor David Simmonds said: "This college will be transformative in a rapidly developing area for young people with a media focus in Hayes.

"The council is delighted that both students and teachers can bring a new element of education and entrepreneurship to the borough."

Plans for the academy include extensive recording and filming studio space, a theatre and a four-storey atrium.

Students will be taught a mainstream key stage 4 and key stage 5 curriculum together with diplomas in broadcast and digital media.

Open Days are already open for registration where the principal will be available to speak to prospective students.

Mr Tabor said: "We want to give young people from diverse backgrounds the opportunity to get a foot on the ladder in the media industry and connect the dots between their core GCSEs and A-Levels, and practical life skills needed in the real world.”