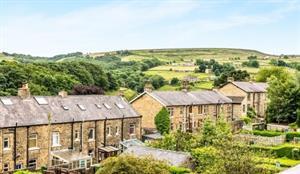 The average cost of a home in the south of England now stands at £324,078 compared with £155,222 in the north, according to Nationwide Building Society.

The north-south house price gap in England has hit a RECORD high of £169,000 as property values in southern regions continued to race ahead.

The average cost of home in the south of England soared by 9.4% year-on-year between April and June, to stand at £324,078 according to Nationwide Building Society.

But growth in the north of England was much more sluggish, rising by only 2.6% to leave home values at £155,222 over the same time spell.

But it remains to be seen how the market will respond to the vote for the UK to leave the European Union, with estate agents reporting many buyers are adopting a ‘wait and see approach’.

The boom in London is being driven by a combination of a strong labour market and high demand for property from investors, such as landlords and overseas buyers.

Prices in the capital and outer metropolitan area jumped by 11.5% and 12.2% respectively during the past year.

But the strong growth has led to affordability becoming stretched, with property prices in London now averaging 12 times average earnings.

Many buyers have therefore been forced to look outside of the capital, which has in turn driven up house prices in the surrounding regions.

But the north of England has not enjoyed the same economic boom, and as a result, house price growth has been correspondingly lower.

While house prices in London are now 54% above their pre-crisis peak, property values still remain below their 2007 highs in the north of England, as well as Wales, Scotland and Northern Ireland.

Although southern regions may have enjoyed strong house price growth in the past year, that is forecast to change going forward, due to the uncertainty caused by the Brexit vote.

Buyers and sellers are expected to sit on their hands until the outlook for both the property market and the UK’s economy becomes clearer.

But there may be some good news for buyers, as international investors are expected to be wary about putting money into the UK, easing competition for properties on the market.

Unsurprisingly, given the combined disruption of the rush to beat the Stamp Duty hike in April and the uncertainty caused by the referendum, house price growth stalled in June.

Meanwhile, the National Association of Estate Agents reported a fall in buyer demand to the lowest level for three years in May, ahead of the referendum.

“It is too early to assess the impact of the referendum vote on the economy.”

But he added that it was encouraging that employment was continuing to grow and borrowing costs remained close to record lows, while the lack of properties for sale was likely to provide underlying support for prices, even if demand softened.