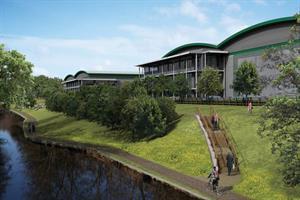 The vacant site in Hayes will be turned into a 465,000 sq ft light industrial and distribution development - creating more than 650 jobs

Hillingdon Council has approved plans to develop a 30-acre site next to Stockley Park in Hayes, which will see a section of greenbelt land eroded.

The council will now refer the planning application to the Greater London Authority (GLA) and because part of the site is in the green belt, to the Secretary of State for the Environment.

Prologis acquired the site from the Stockley Park Consortium in September 2014 and its plans would transform the vacant site into a 465,000 square foot light industrial and distribution development, with the potential to bring more than 650 jobs to the local area.

A spokesperson for Hillingdon Council, said: “Stockley Park is an important part of the borough, as well as being one of Europe's premier business parks.

"Business is booming in Hillingdon and this development brings significant employment and economic benefits for West Drayton and the wider area.

"There will be more than 650 jobs created and fully funded apprenticeships as well as a resident recruitment programme.

The development of Prologis Park West London, also known as Stockley Park phase 3, are subject to the completion of a legal agreement.

The GLA have 21 days and the Secretary of State have 14 days to decide whether or not to direct the council to direct refusal of planning permission.

The council spokesperson added: "The developer has committed to landscaping the currently unattractive canal side which will give residents a significantly improved space for walking, running and cycling as well as improved disabled access.

"They have also gifted parcels of land to the borough where they will extend cycling and walking routes as well as landscape the ground and provide attractive new planting. The amount of open space gained is four times greater than the green belt land taken up by the development.

"This is an exciting project and one which adds to the excellent work happening across the borough to make Hillingdon an exciting and vibrant place to live and work.

The landscaping strategy includes plans to renovate and improve the towpath along the Grand Union canal, which runs along the edge of the site.

Prologis would also carry out landscaping work on an additional 40 acres of land close to the site. When complete, this land would be given to the Council, together with funding for ongoing maintenance.

“Hillingdon has a long history of delivering jobs in the industrial sector and we are committed to being part of the borough’s success,” said Andrew Griffiths, managing director of Prologis UK.

“Prologis Park West London would represent a significant investment for us and would build on the high quality developments that we already own locally.”