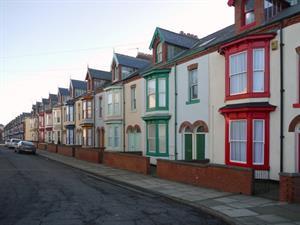 But growth has eased for the second month running, warned Halifax.

House prices soared by 1.7% in December to hit a new record high.

The average value of a UK property increased by nearly £3,500 last month to stand at £208,286, according to mortgage lender Halifax.

But the quarterly rate at which prices are rising remained below 2% for the second month running, suggesting a slight softening in the underlying rate of growth.

House prices increased by just 1.6% between October and December 2015, following a rise of 1.4% in the three months to the end of November.

Even so, property values at the end of the year still ended 9.5% higher than at the start.

The housing market continues to be plagued by a chronic mismatch between supply and demand, which is forcing prices higher as buyers compete against each other for the limited number of homes on the market.

The Royal Institution of Chartered Surveyors (RICS) said the number of new homes being put up for sale fell for the tenth consecutive month in November to hit a new record low.

Martin Ellis, Halifax housing economist, said: “This situation is unlikely to change significantly in the short-term, resulting in continuing upward pressure in prices.”

Homeowners in London have benefitted most from the strong house growth seen during 2015.

Property values in the city rose by 12% during the year, with other areas that saw big gains all either in outer London or within commuting distance of the capital.

Newham saw the biggest gain of all UK towns and cities, with prices in the London borough jumping by a whopping 22%.

But what is good news for existing homeowners is bad news for those trying to buy, with affordability becoming increasingly stretched during the year.


“The lack of supply is a huge issue that will dominate the market in coming months, and will also contribute to house price growth."

Affordability issues may be behind the slight underlying slowdown seen during the final two months of the year.

But any easing in house price growth is expected to be short-lived while supply remains tight.

Demand is also expected to increase significantly during the early part of 2016 as buy-to-let landlords rush to purchase properties ahead of the introduction of new higher Stamp Duty rates for people buying a second home in April.

Jeremy Leaf, former RICS chairman, explained: “There is evidence of easing house price growth but one would expect the market to slow a little towards the end of the year.

“The lack of supply is a huge issue that will dominate the market in coming months, and will also contribute to house price growth.

“While the government is pledging to build more homes, the question is whether there is enough capacity in the market - builders, materials etc - to get the job done.”