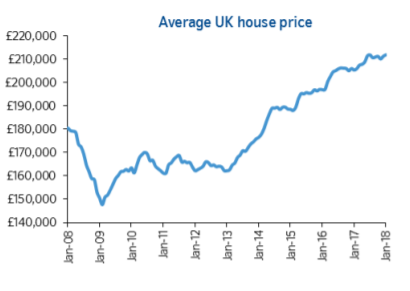 House price growth unexpectedly picked up in January with property values rising by 0.6%.

The increase pushed the annual rate of house price inflation up to 3.2%, its highest rate since March last year.

Robert Gardner, Nationwide’s chief economist, said: “The acceleration in house price growth is a little surprising, given signs of softening in the household sector in recent months.”

It came despite falls in mortgage approvals for house purchase, and reports of reduced interest from potential buyers.

Activity in the property market tends to be volatile around the end of the year as people delay moving plans until after Christmas. This volatility may account in part for the strong reading.

At the same time, while the Royal Institution of Chartered Surveyors has reported a decline in interest from potential buyers, sellers have also stayed away from the market, with the number of homes being put up for sale falling for 23 consecutive months.

This lack of supply is likely to be a key factor in pushing house prices higher during a quiet period for market activity.

While an unexpected rise in house prices may sound problematic for first-time buyers, it is unlikely to be sustained.

Most of the data points to a slowdown in housing market activity, with sellers in some regions now having to discount their properties in order to find a buyer.

That said, a pick-up in activity could be good news for everyone involved in the home buying process, as it may encourage more people to put their properties up for sale, helping to end the current shortage.

Nationwide said the housing market’s performance in the year ahead would be determined largely by developments in the wider economy, including Brexit negotiations.

It warned that subdued economic activity and the ongoing squeeze on household budgets, due to rising inflation, was likely to act as a modest drag on both housing market transactions and house price growth.

But it added that low mortgage rates and high levels of employment would prevent demand from falling too steeply.

At the same time, the slow pace at which new homes are being built is also likely to provide ongoing support for house prices.