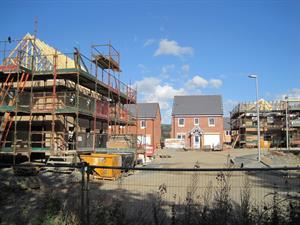 The jump in the number of new homes being built is good news for both first-time buyers and those looking to move up the property ladder.

The number of new homes being built has jumped by nearly 10 per cent during 2015.

A total of 117,525 new-build homes were registered between January and September, 9 per cent more than in the same nine months last year, according to the leading warranty provider, the National House Building Council (NHBC).

And in a further boost for aspiring homeowners, the vast majority of the new-build homes are being sold on the open market.

However, it’s not all good news. There was a slight dip in the number of new-build homes completed between July and September, with these dropping by 2 per cent year-on-year.

And the number of affordable homes built for those on low incomes dropped by 4 per cent over the same three months. They accounted for just 7,692 of the 36,219 new–build homes delivered, with developers holding back due to welfare reforms.

The increase in house building levels is being driven by a rise in both consumer and industry confidence, continuing the trend that started last year.

Government schemes aimed at giving buyers a helping hand, such as Help to Buy, are also contributing to more properties being built. Nearly 50,000 buyers purchased a new-build home using the equity loan part of Help to Buy within two years of its launch in April 2013.

The fact that more new homes are being built is good news for both first-time buyers and those trading up the property ladder.

Buyers currently face a significant shortage of homes and this is driving house prices higher.

But despite the rise in building levels, the total number of properties being built still falls well short of the number needed to keep pace with demand, so buyers will continue to face stiff competition for properties on the market.

A decade ago, Gordon Brown asked economist Kate Barker to carry out a review of the UK housing market - and the findings were pretty stark. The review claimed that up to 250,000 homes needed to be built each year just to keep pace with the rate at which new households were forming.

It warned that a failure to do this would lead to spiralling house prices and a shortage of affordable homes. However, that target has been repeatedly missed.

The number of new homes built fell sharply during the recession, hitting a post-war low of 135,500 in 2012/2013. But the house building industry has been steadily recovering since then.

One of the main issues that continues to hold back house building levels is the lengthy planning permission process that developers have to go through.

Another problem is so-called NIMBY-ism or people not wanting new developments to be built near them.

Other issues include a shortage of land available for building on, a skills shortage and a fall in the number of small house builders in the market.

The Government is working to overcome these obstacles. And earlier this year, the Conservatives put housing at the heart of their election manifesto.

Mike Quinton, NHBC chief executive, said: “Despite the marginal drop in housing registrations this quarter, 2015 is still promising to be a strong year for new housing growth in the UK.

“The industry remains upbeat and is working hard to build the number of homes our country so desperately needs, despite the pressures associated with rapid growth.”