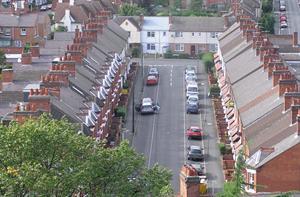 Housing affordability is not just a problem confined to London and the south east, as new research finds.

Homeownership levels in England have fallen to a 30-year low with affordability issues reaching far beyond London and the south east.

The proportion of people who own their own home has dived from a peak of 71% in 2003 to just 64% today, according to think tank, the Resolution Foundation.

The drop in homeowners has been steepest in Greater Manchester, South and West Yorkshire and the West Midlands Metropolitan region, with all of these areas suffering a double-digit drop, according to the data.

The group blamed the situation on the large deposits that first-time buyers now have to put down in order to get on to the property ladder.

It added that the fall in homeownership corresponded with a near doubling in the proportion of people living in private rented accommodation. This has risen from 11% in 2003 to 19% last year.

Renters spend a significantly higher level of their income on housing than those with a mortgage.

The situation has been exacerbated by the fact that house prices have been rising more steeply than earnings for some time.

The report warns that the issue of affordability is no longer confined to London.

Stephen Clarke, policy analyst at the Resolution Foundation, said: “London has a well-recognised, fully-blown housing crisis, but the struggle to buy a home is just as big a problem in cities across the north of England.”

The Resolution Foundation figures support this, showing that homeownership levels have dropped by nearly 15% in Greater Manchester, compared to 13.5% in Greater London.

At the root of the problem is the fact that, while the number of new homes being built has hit their highest level since 2007, there is still 100,000 too few homes each year to keep pace with demand.

This deficit leads to a shortage of homes available on the market to buy, pushing prices higher as potential buyers are forced to compete against each other for limited stock.

Meanwhile, those who rent their homes spend an average of 30% of their income on housing costs, compared with 23% for homeowners with a mortgage. This means they have less spare cash to put towards a deposit.

Research by the English Housing Survey found that two-thirds of people renting a home cited affordability as the biggest barrier towards getting on to the property ladder.