Home building up in spite of Brexit fears 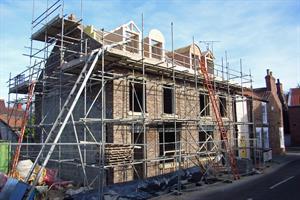 The number of new home registrations hit its highest level in a single quarter since 2007 between April and June, according to NHBC.

The number of new homes earmarked for construction hit its HIGHEST level in a single quarter since 2007 between April and June.

New data from the National House Building Council (NHBC), which represents 80% of the new-build market, revealed that a total of 41,222 new homes were registered in the UK during the second quarter. That's a 1% increase on the same three months in 2015.

NHBC’s registrations are a lead indicator for house building activity as they mark the point at which a builder registers a new plot or home to be covered by their warranty. And most registrations go on to become homes.

The number of new home completions – the point at which a new home is finished by a builder – is also on the rise. NHBC’s latest figures reveal a 6% increase in the year to June 2016 compared to the 12 months previous.

A dip in registrations in the first three months of the year fuelled concerns that the EU Referendum on June 23 could see further negative results for the second quarter.

But Mike Quinton, chief executive of the NHBC, said that’s not what has transpired: “Our latest statistics show that the industry continues to consolidate on the strong growth in registrations seen over recent years. These registrations reflect continued industry confidence in the run-up to the EU Referendum at the end of June.”

Separately, the director of economic affairs at the Home Builders Federation (HBF) John Stewart, suggested that the Help to Buy equity loan - a government scheme available only on new-build homes - has given the sector a boost.

He said: “It’s pretty clear in the few weeks since Brexit that Help to Buy has helped buoy up new homes sales. This has been the case since 2013, but it’s been particularly important in the last few weeks.”

Buyers looking for a new-build home in the south east and north east will have had an easier time in the second quarter of the year compared to the same three months in 2015, with both regions seeing a surge in registrations of 37% and 34% respectively.

However, homehunters in Wales and London may have struggled as registrations plummeted by 30% and 29% respectively.

There’s also good news for buyers hoping to snag a brand new detached house, as NHBC’s research found that the number of registrations for detached homes has overtaken those for flats, potentially meaning more choice on the market.