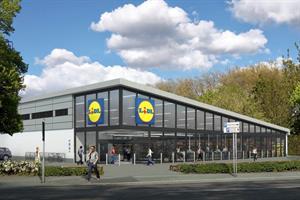 Hayes town centre could have a bigger new Lidl food store, if members of the public respond well to their proposal.

Hillingdon Council are inviting comments from residents about a new 2,741sqm supermarket, which has increased in size since the discount food store initially set eyes on the site.

Lidl submitted a revised application, hoping to provide Hayes with a new 'Lidl of Future store' which will feature their latest specification and modern design, after acquiring extra land.

The store, which is set to provide 40 new jobs, will include 146 free car parking spaces with 14 designated disability space and 28 electric charging points – 76 spaces more than previously suggested.

Lidl received planning permission in November 2015 for the site, which was previously home to Hayes Swimming Pool on Botwell Lane.

But Botwell ward representative, Councillor Janet Gardner, has expressed her worries about the layout.

Cllr Gardner said: “I'm slightly concerned that the entrance and exit will be on Church Road, clearly a survey hasn't been done as its totally inappropriate.

“There is a bus stop, traffic island and nearby dwellings.

“Why not use Central Avenue instead, as vehicles are already using the site for parking and this would seem ideal for an entrance and exit, and the only building opposite is the leisure centre.”

Resident of Hayes for 38 years, Eulette Williams, has given the supermarket 'a big yes'.

She said: “I am delighted with the proposed new Lidl in Hayes Town because it's a shop that I would definitely use.

“I am a pensioner and I don't drive, so a new Lidl on my doorstep would be most welcome. I'm excited already about the savings that I am going to make on my weekly shopping bill.

“Yes, I appreciate all the other shops in the vicinity, but at the end of the day, it's all about choices, accessibility and most of all – bargains. The site is also quite central for many bus routes and local staffing.”

Lidl say the new application will provide the local community with a slightly larger store with “increased car parking and, importantly, a more spacious, brighter and comfortable store”

A Lidl spokesperson said: “This enables customers to benefit from an enhanced and more enjoyable shopping experience.

“We are committed to opening a neighbourhood food store in 2016 and submitted a revised planning application for this new and improved store on 6 November 2015 which has now been validated by London Borough of Hillingdon.

“The consultation period has now started and a decision is due by 12 February 2016.

“We are looking forward to the outcome of this and hope to bring a new store to Hayes in the very near future."