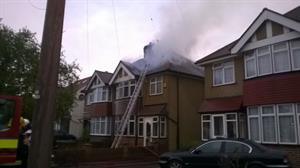 Police are investigating a house fire on Fairdale Gardens, off Coldharbour Lane which took two hours to control

The police and the fire brigade are investigating a blaze which completely destroyed the roof of a home in Hayes.

Four fire engines, 21 firefighters and police officers were called to a house fire on Fairdale Gardens, off Coldharbour Lane, early on Thursday (May 19) morning.

A London Fire Brigade spokesperson said: "The first floor of a two storey house was severely damaged by the blaze, and the roof was entirely destroyed.

"Thankfully there were no reports of any injuries."

It took fire crews just under two hours to tackle the blaze after they were called at 4.15am. The fire was deemed under control at 6.03am.

The cause of the fire is under investigation by London Fire Brigade officers and the police.

Cause of fire is 'unexplained'

Metropolitan Police confirmed they were called to the address at around 4.20am by London Fire Brigade.

A spokesperson for the police said: "Officers are currently investigating the cause of the fire with LFB.

"It’s currently being treated as unexplained."

No arrests have yet been made.