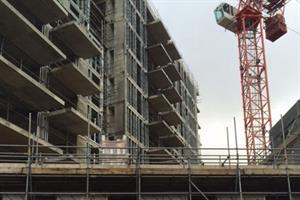 Construction on a block of flats next to Hayes and Harlington station has stopped, despite tearful pleas for housing in the area.

A Hayes councillor is calling for developers to take hasty action, after hearing residents' tearful pleas for help finding somewhere to live.

Councillor Janet Gardner, who represents Botwell ward for the Labour party, is “disgusted and saddened” that a half-constructed affordable housing development has lay dormant for months whilst so many people in the town need a place to live.

'Chance to have a comfortable home'

Paradigm Housing is both a charity and Registered Social Landlord, who turned over £102million and made a surplus of £12.3million in 2014/15.

Cllr Gardner added: "Maybe Paradigm's executives should be asked to explain what they are doing, as they are clearly doing nothing in Blyth Road.

"It may only be bricks and mortar to some people, but to those without a decent place to live, it's a chance to have a comfortable home."

David Brough, chairman of the Hayes Town Partnership, thinks the site in it's current condition begs the question of “why is it so long coming?”

He said: "Work on the housing site opposite Hayes and Harlington Station stopped in June last year when the building contractors went bust.

"The hoardings around the site were padlocked and official notices posted by various suppliers warning that their equipment should not be moved on pain of legal action.

"What concerns me, is that nearly nine months have passed and the desperate shortage of housing continues unabated while this site stands idle."

Paradigm Housing have responded to the pleas and say work will start on the site "as soon as possible", blaming strict EU regulations for the delay.

Andrew Main, Paradigm's director of business development, said: "Funding is in place for the development of 120 new homes at Blythe Road.

"Unfortunately the original contractor has gone bankrupt so work on site has temporarily stopped while we appoint another.
"We're acutely aware of the need for more affordable homes in the region so doing our best to ensure work at Blythe Road starts again as soon as possible.

"We have to follow strict EU regulations when appointing contractors, which can be time consuming, however we expect things to get moving again with the next two months."