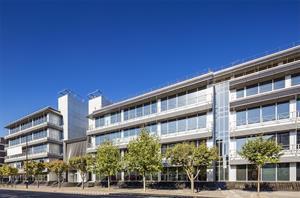 Yesterday I visited the launch of Galliard Homes launch of their new development Trinity SQ in Hounslow. This was the old European head office of American Airlines which is being transformed into 228 apartments ranging from studios to large one beds.

Arriving at 5pm as stated on their marketing materials I was quite surprised that some buyers had been queuing from the night before to ensure they didn’t miss out on their chance to purchase these flats.

The building itself form the outside has quite a distinct frontage and the interior court yard giving in hotel feel. The apartments are of similar layout and spec as the Trident house and Waterside that were launched earlier this year in Hayes opposite the station.

A lot of the potential buyers I meet were first time investors, looking to purchase their first buy to let. Which is understandable, as these type of new build flats carry less risk then an older property and tend to attract a better class of tenant due to the finishing’s.

Overall from the turn out I could say the launch was a success and those who purchased have got a good deal in the long run.

If you have reserved one and are looking to rent out the apartment after completion call me to discuss how we can help.