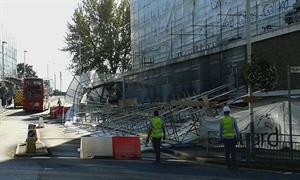 Guy Beggs recalls the terrifying moment he and his son were almost crushed: "It just crashed into the middle of the street.. I thought a bomb was going off, it was so loud"

A distraught father was inches away from scaffolding as it came crashing down onto a busy Hayes road this week.

Guy Beggs, 34, was making his way home with his two-year-old son, after visiting an aunt nearby, when he was nearly crushed by a "domino wave" of scaffolding collapsing on Wednesday (September 30).

The scaffolding was surrounding Trident House, a sold-out Galliard Homes development of apartment suites which are due to be completed in early 2016.

Mr Begg was on his way to catch his train home from Hayes & Harlington station, to Euston, to get back to Manchester after having a farewell lunch with his relative.

He said: “The train was due at 1.11pm, so said I said my goodbyes in the little Chinese restaurant on the corner, and walked near where the renovation was being done.

“There was a truck there at the time so we walked around and I crossed the zebra crossing right on the corner of it."
Mr Beggs was walking up Station Road, holding his two-year-old son Lennon and pulling a suitcase.

“The wind blew all the way down the street and as we walked [Lennon] turned his head away from the dust, so I stopped and turned him away from it and then the scaffolding collapsed just inches away from me.

“It just crashed into the middle of the street. To be honest, I thought a bomb was going off it made that loud of a noise and then I remember looking into the street and seeing all the cars swerving out of the way.

"I looked across to see the scaffolding that had fallen down and it was like a wave, each bit just dragged the other bit down.”
Mr Beggs, who works as a production manager for a maintenance company, recalls the sheer terror as he realised his son could have been seriously hurt.

He told getwestlondon: “I had a bit of a breakdown, I was actually sick to be honest, I didn't know what was going on.
“A couple of people got out of their cars and asked if anybody else was under there, and I said: 'I have no idea, I don't know'.
“I said a few choice words to one of the workmen, saying: 'Who put that scaffolding up? That's terrible!'

“There were a couple of really nice people making sure there were no people underneath it.”

Badly shaken up, Mr Beggs went back to the restaurant he had been in and asked his aunt to hold his son while he “got himself together”.

“I sat outside and another man came up and said: 'You don't realise how lucky you are, I saw it all. You were very very close then, the both of you'.”

With his little son shaken up and crying, Mr Beggs took a taxi to his connecting train in Euston as he “just wanted to get his son home and away from it”.

“I said to my aunt, I want to know why this has happened," he added. "I'm really angry! There could have been 100 people on that pathway.

“It was like a domino wave all the way down, it was unreal.”
Mr Beggs said he was very shaken up and emotion after the incident and couldn't face the drive home after his train journey.
He added: “I've had to go to the doctors because I keep re-living it.
“I want to know why me and my son were nearly killed.”
A Metropolitan Police spokesman confirmed it took a total of six hours to clear the road, finishing at 6.55pm.
He added: “The investigation is with the Health and Safety Executive (HSE).

HSE confirmed they are aware of the incident and are “making preliminary enquiries”.
Galliard Homes were contacted but declined to comment.