Extra fortnight to have your say on Hounslow tower plans 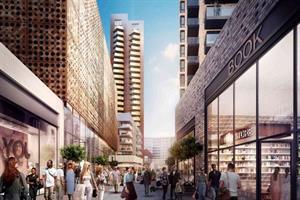 The deadline for comments on proposals for more than 500 homes, including a 27-storey tower plus shops, restaurants, cafés and a cinema, has been extended

The deadline for people to have their say about plans to transform Hounslow town centre has been extended by a fortnight.

People were originally given until Monday (March 30) to comment on an application to build more than 500 homes plus shops, restaurants, cafés and a cinema opposite Asda, just off Hounslow High Street.

But such has been the level of interest in Barratt London and Wilson Bowden's plans for the site, which also include a 27-storey tower, Hounslow Council has agreed to extend the consultation period until April 13.

The extension was announced following a meeting held last Wednesday (March 25) by Hounslow Central Residents' Association (HCRA) to discuss the plans for the car park site, known as the High Street Quarter.

HCRA president Trevor Timpson said the group's major concerns about the application included the loss of light for neighbouring residents and the number of parking spaces, which it feels is too low.

It is particularly upset about the applicants' claim that "surrounding neighbouring properties experience much higher levels of light into them than would usually be the case in an urban, town centre location", which it describes as "insulting and unjustified".

Should the application be approved, the development is scheduled for completion in early 2018.