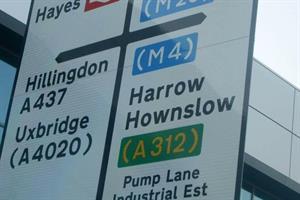 A Hayes road sign road that was the butt of many jokes after a spelling mistake has now been corrected.

The sign, in North Hyde Road, spelt nearby town Hounslow as 'Hownslow', causing giggles and jokes from passersby.

A Dutch company, which was responsible for erecting the sign, altered it following the blunder.

A spokesman for Royal HaskoningDHV, responsible for the mishap, said: " The mistake was brought to our attention and it has now been rectified."

The new sign was erected on Wednesday (May 13) outside the new Asda supermarket on the Westlands Industrial Estate.

The mistake had locals joking about how some of the other local towns could be misspelt, including 'Haze' for Hayes, 'Ryezlip Manna' instead of Ruislip Manor and 'Howrow' in place of Harrow.