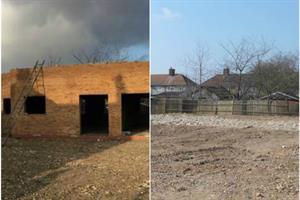 A large building on the site of a proposed care home in Southall has been demolished after the owner failed to comply with approved plans.

The unauthorised building, in 46-52 Beresford Road, was taken down by Ealing Council last month two days after the owner was given an enforcement notice.

Planning permission for a large-scale care home on the site was granted in March 2012 along with a detached, single-storey building at the rear of the property.

Permission for this additional building was granted to contain care home facilities and wardens' residential unit.

But when council officers inspected the building they found the detached building had not been built in line with the approved plans.

The council said the building was causing "significant harm" to neighbouring residents and properties.

The owner was given an initial enforcement notice in September 2013 requiring the building to be removed by April 2014, during which time the owner failed to obtain planning permission to keep it as built.

Further warnings to comply with the notice were given, and ignored, prompting the council to demolish the building on March 16 and 17.

Pat Hayes, the council’s executive director for regeneration and housing, said: "Planning laws are in place to protect communities and stop unauthorised structures being put up indiscriminately.

"If necessary the council will use these powers to take strong action and demolish buildings that do not comply with approved plans.

"The owner of this building was given every opportunity to find an alternative solution that would have been acceptable in planning terms.

"Failure to do so has resulted in the building being demolished by the council and the owner paying the cost for flouting the law."

The owner was sent a bill for the cost of the demolition, and if this bill is not settled the owner will get a charge with interest.