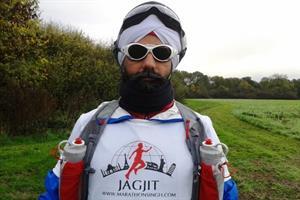 A Hillingdon councillor who has run marathons across the globe is preparing to complete his 150th for a charity close to home.

Jagjit Singh, who represents the Yeading ward, hopes to raise £2,000 for Age UK Hillingdon when he takes part in the London Marathon on April 26.

As a “warm up”, he will also run the Hillingdon Half Marathon on April 12.

Mr Singh, 55, of Minterne Avenue, Hayes, said: “Up to now I've done 141 marathons, so nine left. So hopefully, fingers crossed, I can do it. If no injury comes then it will be fine.”

Father-of-two Mr Singh has completed marathons on every continent – his best time in the London Marathon being four hours, six minutes.

He had been about to complete his 100th marathon, in Rio de Janeiro, Brazil, when he approached the Hillingdon charity, which supports older people in the borough.

Jagjit Singh at the Frankfurt Full Marathon in October 2010

He said: “I picked this charity because I thought, it's the 150th marathon and I'm a local resident here, so I have to do something for a local charity.”

Labour councillor Mr Singh is being supported by a team of teenage South Hillingdon Volunteer Metropolitan Police Cadets, who are organising various fundraisers.

On Sunday (February 15), the group of eight joined Mr Singh at the Sainsbury’s supermarket in Lombardy Retail Park, in Hayes. They raised £263.54 for Age UK Hillingdon.

Lesley McGinty, the charity’s marketing and income generation team leader, said: “The cadets did a fantastic job selling trolley coins and packing bags for shoppers, as well as the traditional bucket collection.”

She added: “We were thrilled that Jagjit came back to support us again and we’re staggered that that he has completed so many more marathons and is now on his 150th.

“When the Volunteer Police Cadets approached us about getting involved, we knew just what they could do to help us. It is fantastic to see youngsters working to raise money to help older people in their area and we’re confident that their enthusiasm, combined with Jagjit’s determination, will raise a lot of money to help us with our work.”