Average price of a home in Britain edges towards £200,000 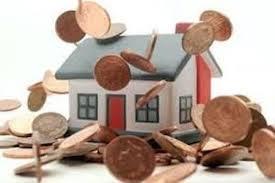 As house prices rise to a new record, research suggests just 43 homes for sale in London are affordable for people on an average wage.

House prices rose at their fastest rate for nine months in April, pushing the average cost of a home up to a new record high, figures showed today.

Property values jumped by 1 per cent during the month, the biggest rise since June last year, leaving the typical British house costing £193,048, according to Nationwide Building Society.

More significantly, the strong gain pushed the annual rate at which prices are growing, considered to be a more stable indicator of underlying market trends, up to 5.2 per cent.

The rise marked the first increase in this measure since August last year, and ended seven consecutive months in which it has fallen.

The pick-up in house price growth comes despite the fact that the pace of activity in the market has remained relatively subdued in recent months, with mortgage approvals for house purchase running at around 20 per cent below the levels seen in early 2014.

Robert Gardner of NationwideRobert Gardner, Nationwide’s chief economist, said: “The strength of the economy and relatively subdued pace of activity in the housing market remains something of an anomaly.

“It is possible that heightened uncertainty ahead of the election is weighing on activity, though there is no compelling evidence from previous elections to suggest a strong impact.

“Healthy labour market conditions and continued low mortgage rates should help to underpin housing demand in the quarters ahead.”

A separate study by the group showed that although Britain is often characterised as being a nation of homeowners, the proportion of people who own a property, either outright or with a mortgage, is actually lower than in most European countries.

It found Britain actually ranks 11 out of 15 European countries for homeownership, although the number of young adults who lived with their parents was also relatively low.

Meanwhile, research carried out by housing charity Shelter found that a chronic shortage of affordable homes was preventing many first-time buyers from getting on to the property ladder.

The group claimed that more than 80 per cent of homes on the market were out of reach for a typical family, while in 10 per cent of local authorities there were no affordable properties for sale at all.

It found that just 43 homes for sale in London would be affordable for people on an average wage, four of which were houseboats, while one was a mobile home.

The charity based its research on the asking price of two bedroom homes in England listed on Zoopla, and worked out how many of these would be affordable to a couple with children on an average income of £30,700.

It found that only 17 per cent of the properties were affordable for people under these circumstances, falling to just 0.1 per cent in London and 3.9 per cent in the South East.

At the other end of the scale, the North East was most affordable for first-time buyer families with 42 per cent of homes on the market within their reach.