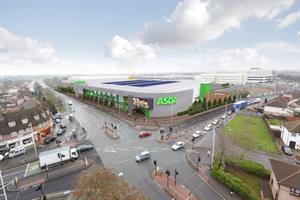 The long-awaited store is expected to open in July, providing a shot in the arm for the town's shopping scene and creating up to 300 jobs

A long-awaited Asda is on track to open in Hayes this summer, creating up to 300 jobs.

The supermarket giant said on Friday (April 10) that the 44,000sq-ft superstore is expected to start trading in Millington Road in July.

It will include pizza and fish counters, a cafe and a clothing section.

Store manager Lee Randall told getwestlondon: “We’re feeling really positive about the number of jobs being created in Hayes as part of the store opening and the amount of interest we’ve had already from potential recruits is overwhelming.

“We are all really excited to get the doors open and welcome our new customers into our brand new store.”

He added: “Not only that but we hope to make a big difference to charities, groups and organisations in the Hayes area through our Community Life initiative, which provides financial and voluntary support.”

The plans for the store were first announced in January 2011, but Hillingdon Council refused permission for the project in November that year.

The council argued that the site – once home to the Westland helicopter factory – should be retained for industrial use, in accordance with Greater London Authority guidelines.

Asda appealed and, after a hard-fought public inquiry, managed to overturn the decision.

Councillor Douglas Mills, cabinet member for community, commerce and regeneration, said the store would provide much-needed jobs for those living nearby.

He added: “This is exactly the kind of regeneration that we have been supporting and wish to see more of, and expect to see more of throughout the borough.

“It’s something I think which is very beneficial to Hayes and, in particular, it’s all part of the change that Hayes and West Drayton will be seeing over the next few years before Crossrail opens.”

A mixture of full and part-time jobs will be available across all of the store’s departments.